“For my part, I travel not to go anywhere, but to go. I travel for travel’s sake. The great affair is to move.” – Robert Louis Stevenson

This post and the ones following are a long time in coming, but finally I’ve been given a moment of respite to get started on them. Though my third adventure in India is weeks over, I’m left – as always – with great memories of my travels.

This year my traveling bug was definitely more than satisfied. In February for my 30th birthday, I did what I love to do – travel and see new sights! This time I did it in the company of some awesome friends. Our week long adventure started with a very long train ride and then private bus to Agra to see the majestic and beautiful Taj Mahal. Now, I’ve seen this great moment before in 2011, but seeing it again in the morning light was a breathtaking experience.

Our bunk beds were very cosy! 🙂

After the Taj Mahal visit, the next visit was to the Agra Fort, which was very close by. The fort has a very interesting history; one thing that stood out to me was that the fort actually housed the king who had the Taj Mahal built for his third wife. As the story goes the king had built the Taj for her and then his son threw him in jail after he bankrupted India to build the building. The king’s only request was that his prison have a window that let him see the Taj to be close to his love.

Entrance to the fort.

First Inner court yard in the fort we passed by. 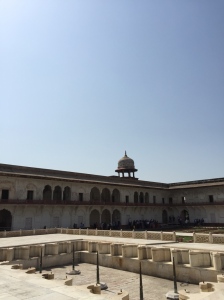 Another portion of the fort.

I wasn’t in the king’s jail cell, but I’m figuring this is what it was sort of like. The Taj in the distance.

The next city on our journey was Jodphur. Jodphur is the second largest metropolitan city in the state of Rajasthan. It is also often referred to as “the blue city” because many of the houses have blue roofs. Jodphur was a gorgeous city with a royal family and palace and an amazing fort as well. Food is also a big component of every state in India, so of course we had to have a traditional Rajasthani mean – it was as delicious as it looks here.

Jodphur Palace – the royal family still live in one of the wings. The other part of the palace was made into a Taj Hotel.

Another view of the palace – this is the part that is the Taj Hotel.

Outside shot of the Jodphur Fort.

Look at all the yummy food! It was delicious…well except for the buttermilk – I’m not a fan of that.

The next leg of our journey was to the reputed “Golden City” which is called Jaisalmer. This city use to the hub of commerce for India, because it was were the Silk Road passed through. Once the silk trade was done, many of the merchants moved out of this city and set up shop in Mumbai. This city too has a fort, but the most fascinating thing about this fort is that it is still lived in! It was very cool to see a fort being used the way it should be – to house as many families and business as possible!

Outside view of the fort.

Shots of the inside of the fort. Lots of narrow and winding paths. Very interesting place.

Pics of some locals, looking at the tourist. 🙂

There is a sandstorm coming up in the background of this picture, but still a great shot of the “Golden City” city of Jaisalmer.

Finally we wrapped up our whirlwind of a trip going into the Great Saam desert for some camel riding and to ‘glamp’ in the sands. The tents that we stayed in were permanent and were very nicely set up. The camel riding was fun and memorable.

Permanent tents we slept in. 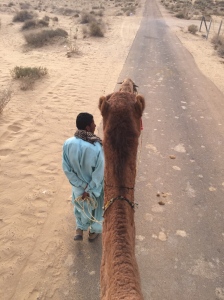 My camel and my driver.

Selfie time! Also you can see some of my pals in the background.

The people who led us to and from the camping site into the desert.

This camel wanted a break.

I'm not one to talk about myself too much, however I'm a certified nerd and geek. While I used to work at a large company in the healthcare industry, I am now a Global MBA student at Case Western Reserve University. I'm also an avid traveller, reader, and a writer. Last but certainly not least, I look forward to all the challenges that come my way (most of the time anyway).