…Yes it’s been nearly ten months since my last post. Last two semesters of an MBA are not for the faint of heart. Apologies, but in the next few days I’ll be doing a rapid-fire update of this blog with everything that has happened since May 2015. However, I must recap February and April 2015 as well so…without further ado…Mumbai!

Gateway to India at Dawn

The trip to Mumbai was great for two reasons. The first reason was that the trip was part of a Business Trek that the Case Western Reserve University Careers Services put together for those who were interested. This trek took us to some of the prominent businesses that were in Mumbai that fit a variety of interest with the students who came. The second reason that it was great was simply being able to visit another old and historical city in India.

During the business trek, we saw four distinct business and industries. Our first company visit was to Reliance Corporation, which is run and owned by the Ambani family. The corporation started within fabric manufacturing and branched out into gas and oil refinery that it is more known for. It was really interesting to get the history of the family and the reasons for expansion and how they went about it.

The next visit was with an advertising firm called Leo Burnett in their Mumbai office. This global advertising firm has its roots in the USA however, when it comes to marketing and advertising the different offices seem to have their focuses. In the Mumbai office, the team seemed to focus obviously more on the Indian advertisements, but they also made advertisements for other countries on different continents such as Africa. (I can’t remember the country that one of the advertisements is for; I believe it’s Kenya, but not sure) It was really cool to hear their stories and see the amount of data that they had collected from consumers and what all the analyses were showing them.

Third we were able to visit the Mumbai Stock Exchange and get a tour of the oldest exchange in India. It was awesome to see the history and we were even able to see the opening bell that was still used. The discussion that happened afterwards about the financial markets in India and the current economy were very stimulating and our host was extremely candid.

The last place we visited was the headquarters for TCS, which is TATA Consultancy Services. It was very interesting to hear the origins of yet another company within the TATA conglomerate and to see the home office for such a large organization. I have personally worked with a lot of consultants from TCS in the United States and the caliber of people they have specialized in various technology services is pretty good.

At the end of our trip we were able to meet with Case Western alumni who were from Mumbai or in the vicinity and networked with them for an evening. Most went on to start their own businesses back in India after their MBA programs, which is a huge trend in that country. The various businesses spanned across almost every industry and listening to their stories of starting from scratch and where they were now was awesome.

It was a whirlwind trip of 4 days, but we were able to see and do a lot there.

The next trip I went on happened about two months later in April of 2015. I went to Bangalore to visit a very good friend of mine. Let me tell you, I was in Bangalore in 2011 and even four short years later; the city had gone through a crazy amount of transformation. Of course the traffic was ridiculous, but with the city being the Silicon Valley of India, it seemed to me the expats that were now residing in the city almost tripled.

While in Bangalore we took a tour of the oldest part of the city and visited a very cool market place that distributed fruits, vegetables, spices, and flowers. This place was the center for such things and still is today. According to my friend and our tour guide many restaurants, wedding planners, and other business owners would come and haggle or bid on products. For the fruit and vegetable part of the market local farmers would pay for a space and sell their produce until it was out and then leave. At the flower market, they held open bids on flowers for many different occasions. It was all very fast paced, crowded, and extremely colorful.

We also toured some of the old ruins, such as a piece of what use to be the Bangalore Fort that surrounded the city at the time of the British conquests. We also toured one of the old residences of wartime general that stood up to the British Empire and held them off for many decades. It was great to spend some of the time there learning more about the history of the great city. 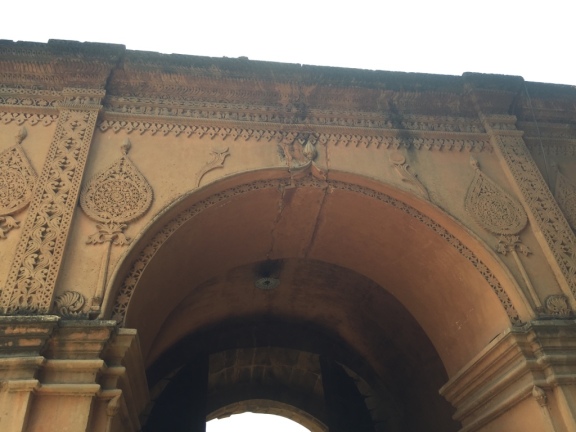 I'm not one to talk about myself too much, however I'm a certified nerd and geek. While I used to work at a large company in the healthcare industry, I am now a Global MBA student at Case Western Reserve University. I'm also an avid traveller, reader, and a writer. Last but certainly not least, I look forward to all the challenges that come my way (most of the time anyway).