Don’t cry because it’s over, smile because it happened. ~ Dr. Seuss

The old saying goes, when life gives you lemons – make lemonade. However, what is the saying for when life this sort of takes over and everything else falls by the sidelines?

Unfortunately, there is no catchy saying for that.

Apologies for such a delayed couple of posts, but life certainly took over for the past seven months and many things fell to the sidelines. Since my last post I have graduated with an MBA, been on numerous trips and am now flying back to my home from yet another trip to wrap up the year 2016. This is going to be a much shorter recap then I wanted, due to timing, but better late (and abbreviated) than not at all right?

My summer began in Mexico. This has been a yearly trip with a large group of friends for the past couple of years now. We rented out houses and then just lay about on the beach, and go on a few trips as well. The stay lasted a week but of course if felt like one very long summer day. The houses that were rented were steps from the beach. During this trip I was also training for a half marathon so a couple of those days I took some three to seven mile runs in the early morning along the streets of Playa del Carmen and on the beach itself. On this trip I was able to go to the Mayan Ruins of Chichen Itza and to dive into one of the largest cenotes that I’ve been to. Mexico was as always and amazing trip; great food, great company, cool excursions, and beautiful views.

Me in front of El Castillo 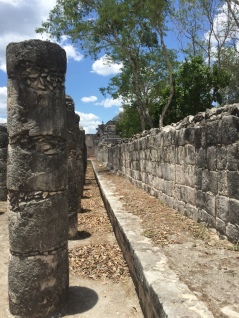 The month of June was peppered with small trips to Atlanta to visit my mom and younger sisters, Columbus to have orientation for my new job, and training for my half marathon, which was in July. July brought me to Chicago to run the Rock N’ Roll Half Marathon with a friend from work and my one of my younger sisters. Not only did the race go well (even if it did rain), but also we were able to go to one of my favorite museums, Chicago Art Museum, while we were there. We also to advantage of the weekend to walk around the city and take in the sights not only on foot but also in the back of a horse draw carriage. 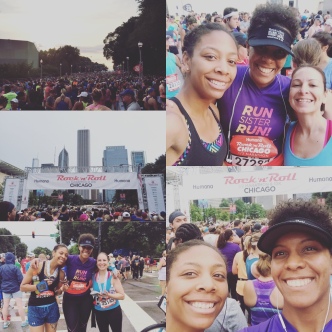 Rock N’ Roll  Chicago Half Marathon with my sister Torryn and friend Jennifer! 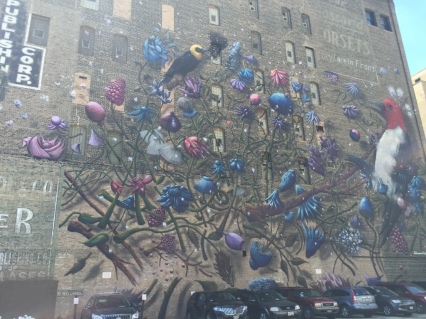 July wrapped up with a friend’s wedding at the end of the month and August rolled right in afterwards with a trip to Atlanta for my youngest sisters 14th birthday (BIG deal). Middle of august rolled around with a trip to Cincinnati for a summer meeting for work that happened in the latter half of the 3rd week. That Saturday I drove back up to Cleveland with a friend from Columbus and we walked around downtown Cleveland looking for quirky plastic art installations.

Google Earth car on the way to Cinci! 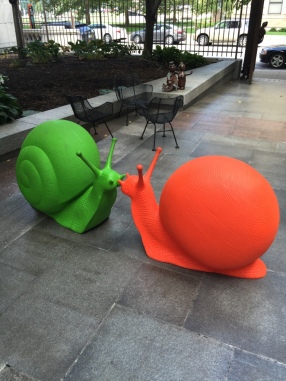 Between work and my busy social calendar, September was here before I knew it. As I spend every Labor Day weekend, I went back to Atlanta for Dragon*Con 2016! Had a blast catching up with friends that I usually only see during this time and had some great moments for being a fan while meeting some actors that have been on my wish list for a while. 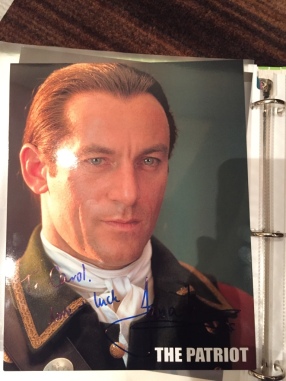 Jason Issacs – this guy is amazing! 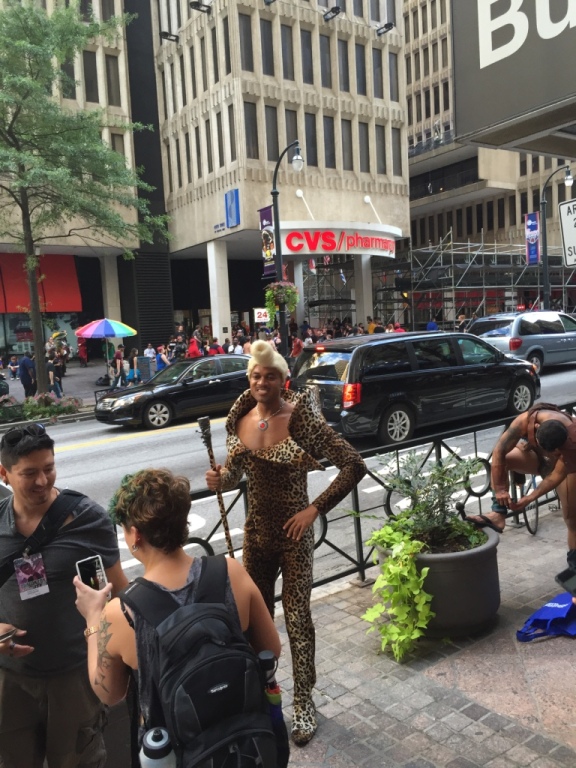 My September wasn’t over by a long shot because as soon as I returned to Cleveland I flew back to Atlanta the next weekend for Midtown Music Festival 2016 where I was able to see some of my favorite artists on stage. My favorite was 21 Pilots, they are amazing! It was a great way to wrap up the summer! 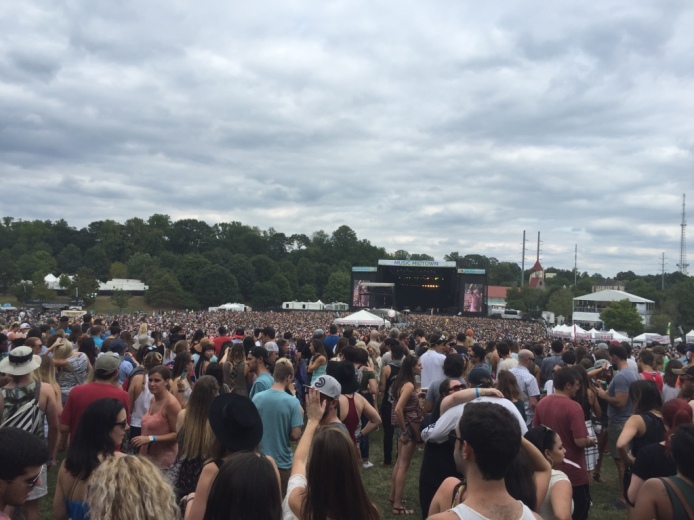 Next up: Autumn has gone, winter is here, and the end of the year is near…

“I know that aiming at perfection has its drawbacks. It makes you go into details that you can avoid but that is the only way you can achieve excellence. So, in that case, being finicky is essential.” – J.R.D. Tata

There is usually that one person who sparks inspiration and ingenuity that spreads into a wildfire of innovation and revolutionizes an age.

For India, it ended up being one family.

India is known as the birthplace for yoga, for the colorful clothes, the interesting history, and of course for the Taj Mahal. However, for many that is all that they know India for. Those in business know that there is just one more thing synonymous with India – and that is the TATA Group.

The TATA Group is a conglomerate of a hundred companies in everything from motors, to the food industry, from jewelry, all the way to technological consultancy services. Obviously the group wasn’t started on its own. It was started by one man in the late nineteenth century, with the dream of only starting one company, and his name was Jamshedji Tata.

On XLRI’s campus, there is a museum and archives for the first company created by the descendants of Jamshedji Tata, TATA Steel. TATA Steel was the first industrial company that was created by an Indian in India in the early twentieth century. Though he wasn’t alive to see it built, Jamshedji set the plans in motion. It was amazing hear from our tour guide all the various ideas and the great lengths that this gentleman went through in order to pursue a dream. Not only was he instrumental in the creation of TATA Steel, but he was also integral in the creation of India’s first technical institute, and India’s first planned city, which of course was named in honor of him; Jamshedpur.

Jamshedpur, where XLRI is located, is TATA’s city. You can see TATA Steel from campus and it’s still producing quality steel that is used by the likes of Honda, Toyota, and Hyundai. TATA motors also has offices here and hopefully as part of our courses here we will be able to go to this factory as well. I haven’t seen much of Jamshedpur, but from what I can see, it is a beautiful city. It is the first planned city, as I mentioned before, and it is also the seventh (or eighth) cleanest city in India. Another unique fact about Jamshedpur is that the city is completely run by the TATA Group, not the Indian city government. TATA provides filtered water and electricity to the city. TATA owns some of the land that makes up Jamshedpur, but the rest it leases from the government. The current term of the lease is 99 years and the lease was just renewed in the last few years.

From the museum visit, I also learned that TATA group also pours much of their resources into environmental protection and education for the people of Jamshedpur and the rural villages that are around the city. They have many small programs such as health programs, and teaching programs in these rural parts, not only to foster a learning environment, but also making sure the people are healthy and well cared for and more opportunities than they could have imagined before.

It’s always nice to see a huge corporation giving back to the people and for me, I’m awed to see that the inspiration of one man over a century ago, inspired his family to create and nurture this same spirit within itself and to others over the years that have past.

One exhibit detailing the history of Jamshedji Tata and the start of the TATA Steel plant and other companies. 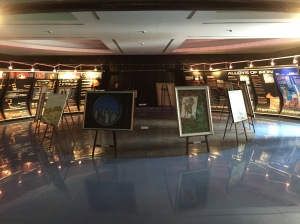 This portion of the archive depicts the steel making process on the walls. However, it also showcases local Indian artists and their paintings. All of these paintings have been bought by the TATA Group. 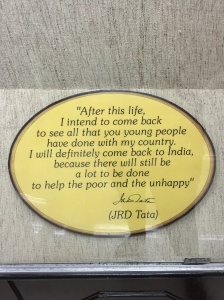 Another amazing man from the TATA family. He dedicated his life to his passion for aviation and the education of children in India. This is his last quoted statement, before he died. 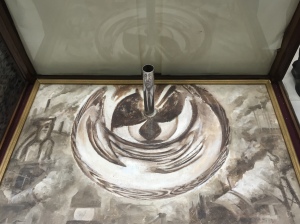 A painting that was created by a local Jamshedpur artists – who is illiterate – and found away to create a portrait of JRD using convex mirror reflections.

What would you say to having a week off for no other reason than to celebrate the inauguration of the People’s Republic of China (PRC)?

October 1st is National Day, but interestingly enough after some digging, I found out that the actual day that the PRC was founded was on September 21st, 1949. On October 1st, 1949  a ceremony was held in the  in Tiananmen Square which celebrated the forming of the Central People’s Government for the new country. The next day, October 2nd, 1949, the newly named government passed the ‘Resolution on the National Day of the People’s Republic of China’ and declared that October 1st to be National Day. Since 1950, October 1st have been celebrated in big style here in China.

So how does 1 National Day turn into 7 days of festivities? According to what I’ve been told and read, the legal holiday for National Day is 3-days on mainland China. These three days are then bookend by the weekends before and after those three days, hence a seven day vacation which is called ‘Golden Week.’ This holiday is the longest public holiday in China, besides Spring Festival holiday.

Long story short…I took shameless advantage of the time that I had off and explored!

On the first day of Golden Week a few friends and I went to Suzhou, which is reputed to be the silk capital in China. After hopping on an early train, we set off and took a tour of the Humble Administrator’s Garden, which is a beautiful house with many different rooms and of course plenty of greenery around. Next we took a boat ride in the canals of the city, and then we had a tour of the Silk Museum and we were even able to see one of the machines where the workers unravel the silk cocoons from the silk worms after they turn into moths.

Serenity and Beauty all in one – pic of one of the small houses in the garden.

Boat ride along the canal

After the museum the girls decided to to head to the renowned Wedding Dress street which has over 700 wedding dress shops, to find a dress for a bride to be in our group. We met up with the guys a little later as we made our way back to the train station.

Travel Group: (from left) Bonnie, Alex, Me!, Rachel aka Bride to Be! Kneeling is (from left) Sammy, and Ted

It was a great first day of the week. After that the rest of the week was honestly a blur of sleeping in, wondering around the city, and studying. There were a few more highlights though.

One of them was going to one of the famed Fabric Markets here in Shanghai. The one that I have gone to twice already is off of Nanpu Bridge station (Line 4). It was basically a mall with 3 floors of nothing but fabrics and tailors. It can get pretty overwhelming at times, but it was fun going shopping for something to get made! 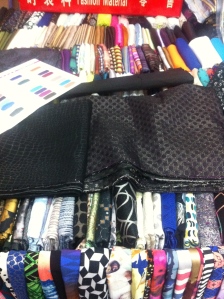 Shopping for some fabric to make into a skirt for a friend back in NYC!

The latest adventure was yesterday, when I ventured with a few friends to the Shanghai Science and Technology Museum. Let me tell you – it was super duper fun! There were plenty of things that you could actually mess around with. It was almost like the Science and Technology Museum in Cleveland, Ohio. I felt like a kid again, especially running around with many gaggles of Chinese elementary schoolers that day!

Outside of the Shanghai Science and Technology Museum 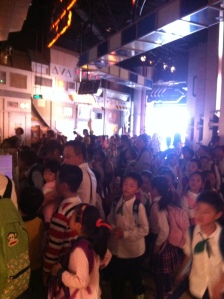 Gaggles of school children at the Museum – I felt like a giant! 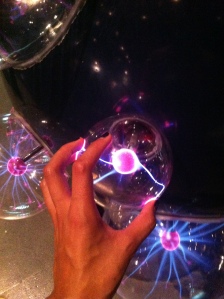 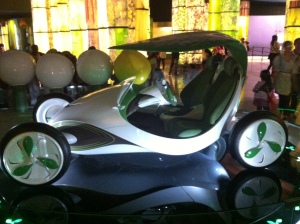 So all in all it’s been a big crazy party the last week or so!