After the school semester ended in India, one of my good friends and I decided to take two weeks and explore parts of India that we were unable to get to during the semester. I knew I wanted to go someplace new and also revisit old pleasurable places. With this in mind our traveling took us south to Kerala and north to Rishikesh.

While hanging out with friends in Bangalore I met the owner of a tour company in India called Travspire (http://travspire.com/). It was a great meeting, Arjun was/is awesome and he was more than happy to help me with the planning of my trip. (Pssst, he was also the organizer of our tour of old Bangalore – really cool guy!)

Moving forward, working with Travspire, our itinerary unfolded before us. We were going to spend 5 days and 4 nights in Kerala before heading to the mountains of India. Travspire coordinated a private driver to meet us at the airport in Cochin and be with us for our entire stay. They also coordinated an all day tour of Fort Kochi, the hotel stay there, and our backwaters bungalow in Alleppey, plus a kayaking experience on the backwaters. Our driver was from that area so he was amazingly helpful in helping us find a respectable Ayurveda Spa to get massages at.

During our stay in Cochin, we stayed within Fort Kochi at one of the few hotels in the Dutch quarter called the Tower House (http://the-tower-house.neemranahotels.com/). This place was great, you could definitely see Dutch influences in the design of the hotel and the hotel was situated close to the water. We arrived in Cochin late afternoon. Our driver promptly took us to our hotel and we just wandered around the fort for the night. The next morning we woke up early enough to take a walk along the waters edge. All across the beach there were these Chinese fishing nets where fishermen were looking for that day’s catch.

At the Tower House, our breakfast was included in the room price; we ate a more western style breakfast that day, before meeting with our tour guide. The tour was very good. He started close to the hotel and then took us along to one of the oldest churches in the fort, to a renowned spice shop (where Rachel and I bought a ton of spices), to the last royal family’s house in the fort, and finally to a couple of antique shops. The whole tour was great and we had an enjoyable first half of the day. 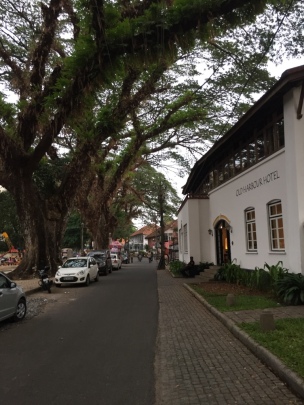 Fort Kochi interior, next to Tower House (on right) 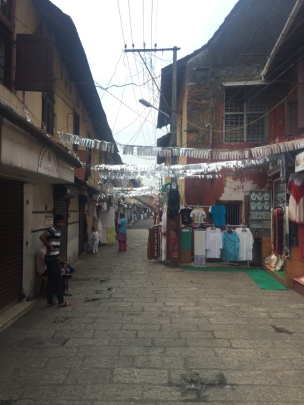 In the afternoon we drove to Alleppey, which most people equate with the backwaters in Kerala. There are backwaters really all over the place, but Alleppey is the most well known stop for them, due to the fact there are many there. During our stay here, we stayed in the Katis Home (http://www.kaitshome.com/index.html), which is a homestay along the backwaters. This place was amazing. The family who runs it was so very nice and thoughtful. We had the majority of our meals here and all of them were delicious (the masala chai was also really really good). Here we had our own little cottage/bungalow and there was a gazebo right on the water. It was peaceful and relaxing, which was exactly what we were looking for after our semester. 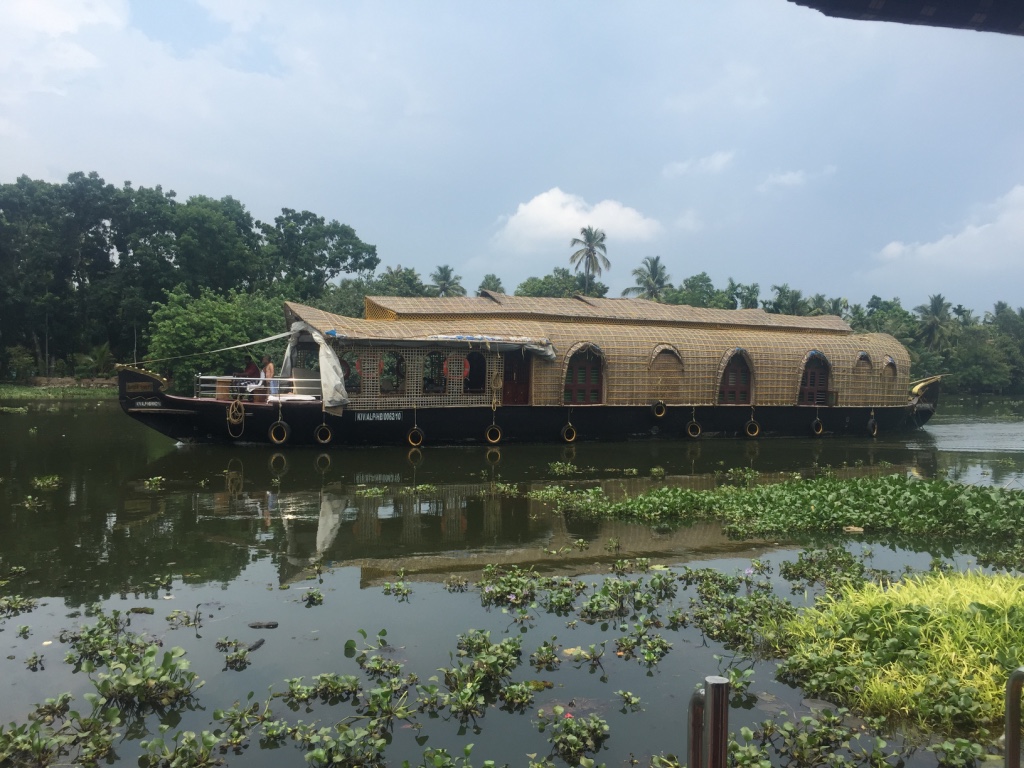 How close were we to the backwaters?…this close. Pic taken from gazebo at Katis House.

The kayaking experience on the backwaters was also very neat. We were up at the crack of dawn, around 5:30AM. The kayaking took place in the early morning sun, which made it even more fun, because it was quiet and before people began to start their day. The tour group was maybe 8 of us, and they had a boat that followed us the entire time in case we wanted a break. We kayaked for about 2.5 hours in 20-25 min intervals. It was breathtaking. Our kayaking tour also included a traditional Kerala Indian breakfast, which was phenomenal. 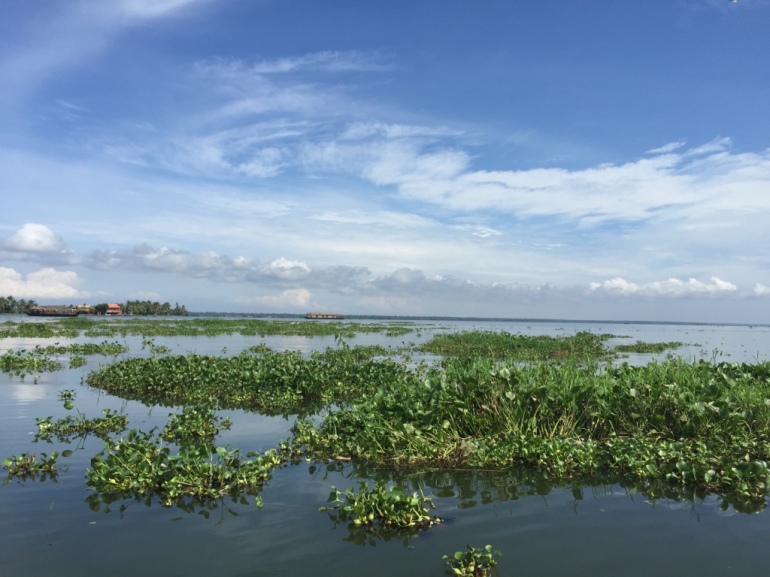 How beautiful is this? Kayaking in the backwaters of Kerala.

Kayaking boat that followed us everywhere. 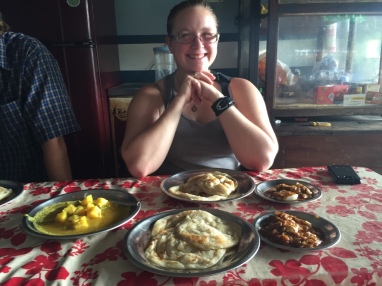 Rachel (my buddy) with the breakfast feast. Delicious!

The Ayurveda Spa we went to was also really nice. The prices were decent and the place was very clean. The masseurs were really good at their job and the whole experience was interesting to saw the least. A traditional massage involves a lot of oil, and depending on the add-ons you can add hot stones or other things to the regular massage. I think this was the first time I was pretty much naked in front of someone for a massage, but when in Rome right? It was all very professional and I was super relaxed after the whole experience and I decided another massage was in my future.

During our last day at the homestay, we took a kayak that the homestay had and kayaked a little up the backwaters right outside our front door. We also walked to the nearest village and pretty much just looked around, bought some ice cream, and just enjoyed the fact that we were there.

One of the many beautiful dwellings to/from town by the Katis House. It was a very good walk.

I had such a good time there and I know my friend did as well. For anyone going to Kerala, Cochin and Alleppey are must dos on the list. I’ll probably revisit these places on my next trip there and of course, go farther afield.

We flew into Rishikesh the next day, not knowing that a large earthquake had hit Nepal and triggered an avalanche on Mount Everest. Yeah you remember that day last year? Well we were on our way to Delhi airport for our connection and were apparently in the air when it happened. Crazy right? We arrived in Rishikesh around 9pm that night.

Rishikesh is hill station at the base of some of the Himalayan mountain chain. This place from what I’ve been told is a very holy place and the Ganga River that flows in this part of the country is very clean and a place where many sunrise and sunset rituals are preformed. There are many yoga retreats and ashrams in and around Rishikesh and all number of stores and places to eat. The first time I came was in 2011 and coming back was very surprised at how much more there was. It is now touristier than I remember, but still a very cool place. 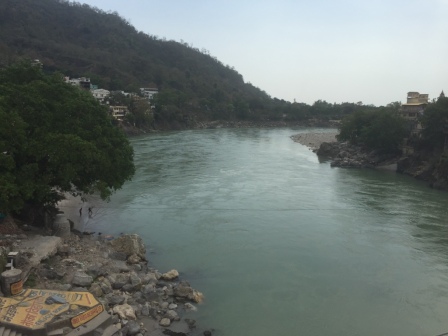 Rishikesh Monkeys (watch your shiny things – they will grab them)

Spotted on the way to Rishikesh – moving Indian style.

As I did before, I stayed at the Sattva Wellness and Retreat center (http://thesattva.com/). This place opened up in 2011, so the first time I was one of the first guests. Many amenities have been added since that time, but this place – I just really find peace here every time I’m there. There is a riverbed down the steps of the resort and you can hear the water running along it even up in the rooms of the restort, it makes more a very calming experience. Our entire stay in Rishikesh and at the Sattva center was one of lazy relaxation. We went into town, we hiked up the riverbed, we had massages again, and we just rested. It was a great way to end our stay in India. 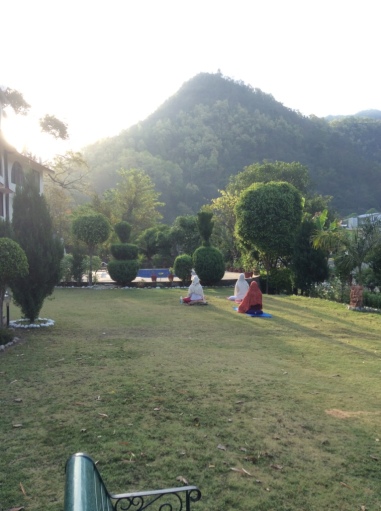 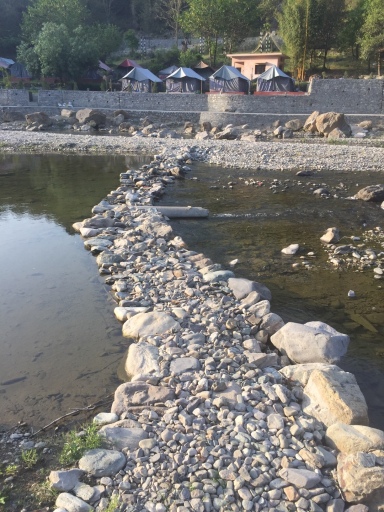